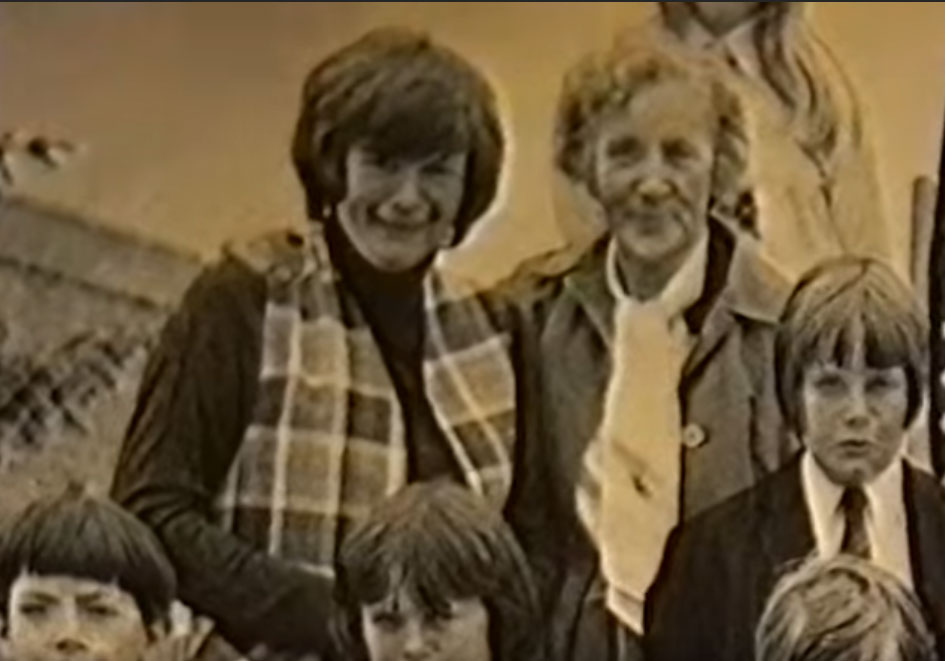 Joan Hutchison and Seordag Murray with children at the MOD.

Seordag, the cyborg hen, was inspired by David Hutchison's Great Aunt Seordag Murray. She was fun, had a sharp and witty sense of humour and was one of only a few Gaelic speakers left in Assynt. She did a lot to try and keep the language alive. She taught Gaelic classes in Lochinver (NW Highlands) and helped David's mother Joan, who taught children on the music side, to prepare for the MOD (Gaelic culture festival). Seordag had worked in technology during WW2, so Seordag the TV Hen hatched from the combination of Gaelic and technology. Other influences included the nearby Summer Isles and Gruinaird Island; used for biological warfare. 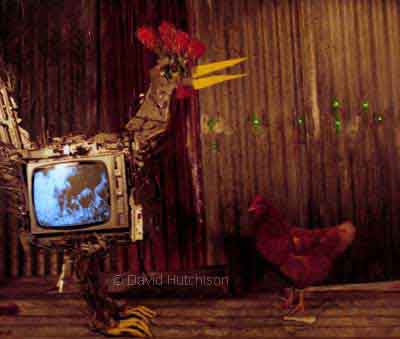 Seordag began as a videosculpture in 1992. She had a real television for her stomach, linked by cable to a VHS recorder, playing a looped video of her hatching from a gold egg. Initally she was named Seordag the TV hen, but later just became Seordag. After creating a metal cage for her she was exhibited in the Printmakers Gallery in Inverness and then on local TV news programme North Tonight, which led to David's first animation commission, as Background & Props Artist for West Highland Animation series Uruisg Na H'Alba. 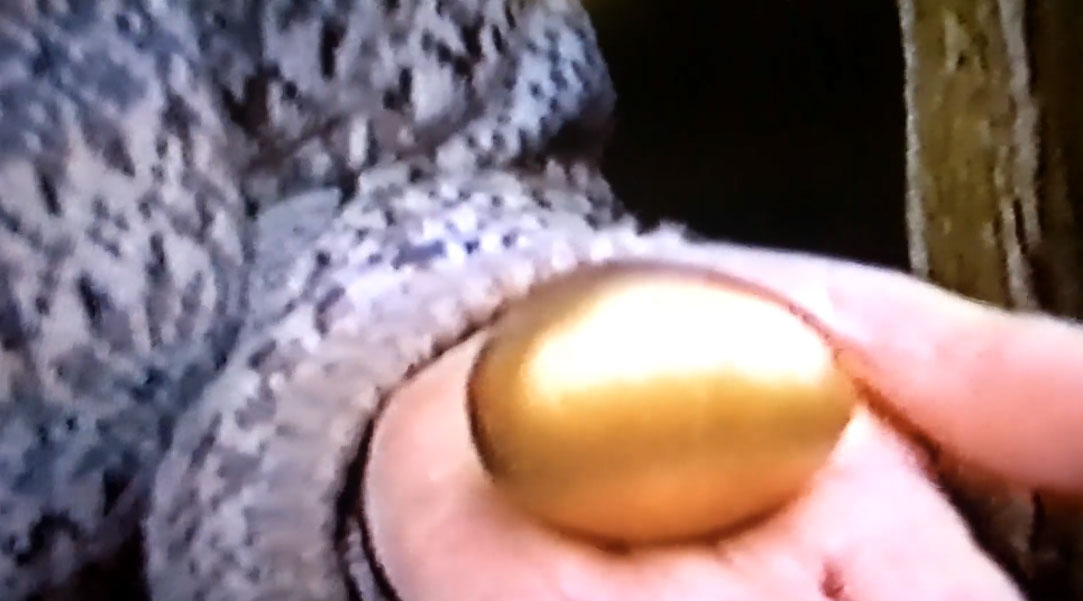 Seordag Murray and David's other Great Aunt Helena Sutherland (Lena) both took part in the video. They shot in Lena's garden, henhouse, Seordag's kitchen and the dining room of the Culag Hotel, Lochinver. 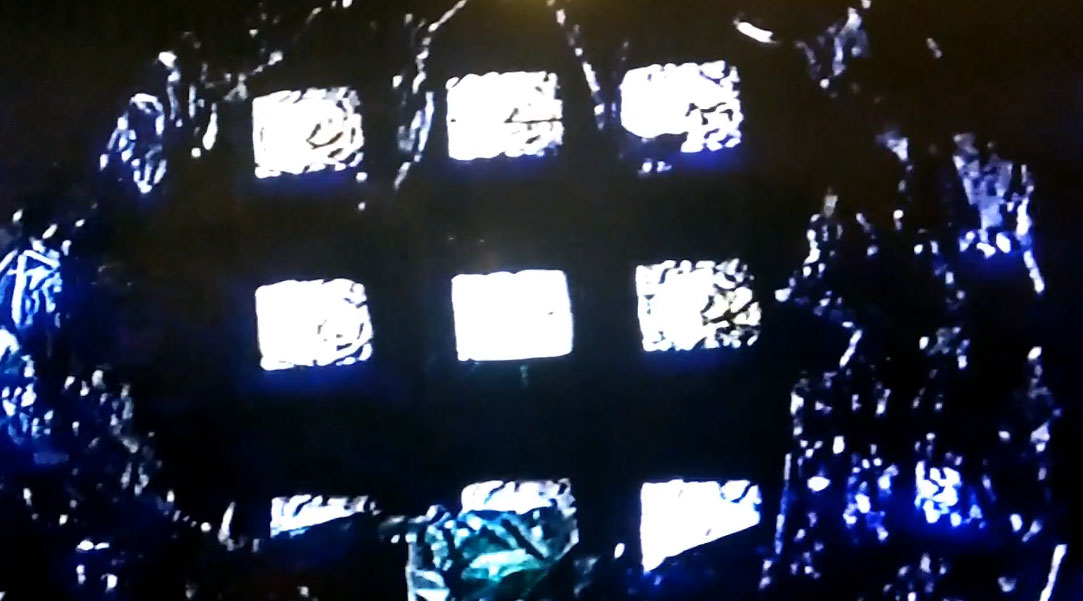 David's parents helped him to make the stopframe animation section of the video in their freezing cold shed in the middle of winter, using corrugated iron sheets reclaimed from their old byre as a backdrop. David welded together steel (left over from making creels) into a giant egg and used the TV sets from the Culag Hotel's bedrooms to create an egg video wall.

Where Will I Make My Nest 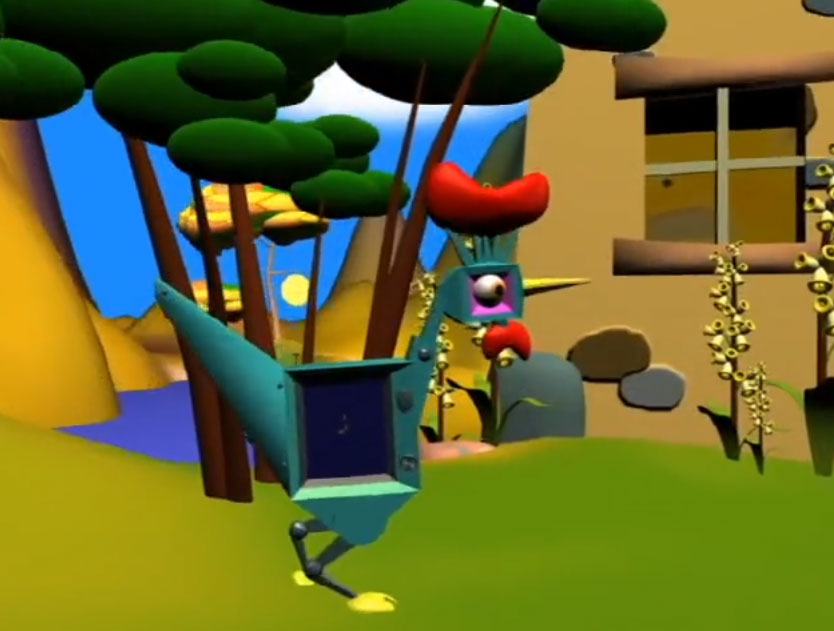 Between the late 90s and the early 00s David wrote the short story "Where Will I Make My Nest?" Seordag Murray translated it into Gaelic ("Càit An Dèan Mi Mo Nead?").

He made Seordag TV,a 3D animation clip of part of the story in a loop, while attending a Maya course at Escape Studios in London, with a grant from the Scottish Arts Council. 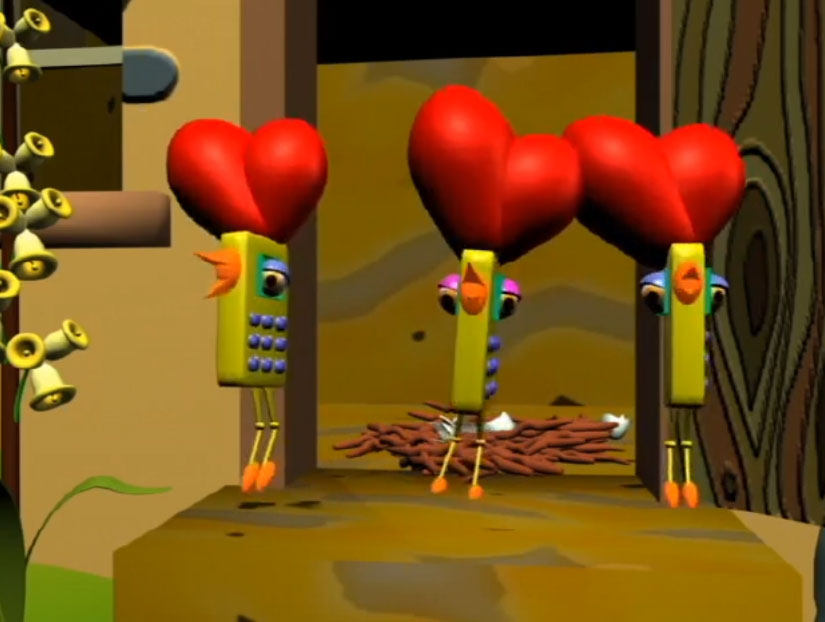 David had made an experimental video of his mother's band The Lochinver Ceilidh Band and so was thinking of musical intruments when he came up with the musical cyborgs Blarag the cowfiddle and Ewella the accordion sheep. 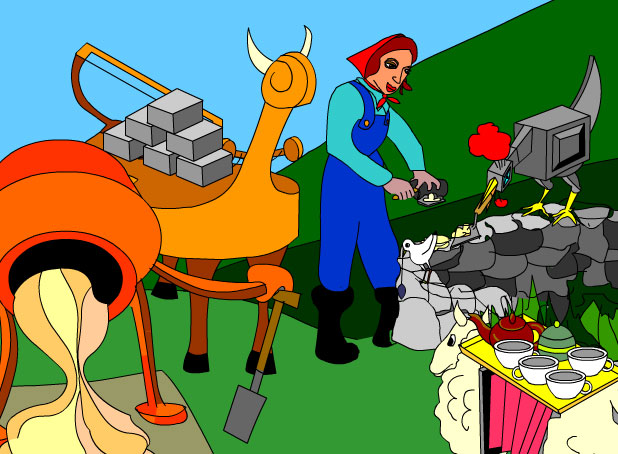 David's Aunt Marlene MacKenzie is a crofter and was the inspiration for the crofter in the story. 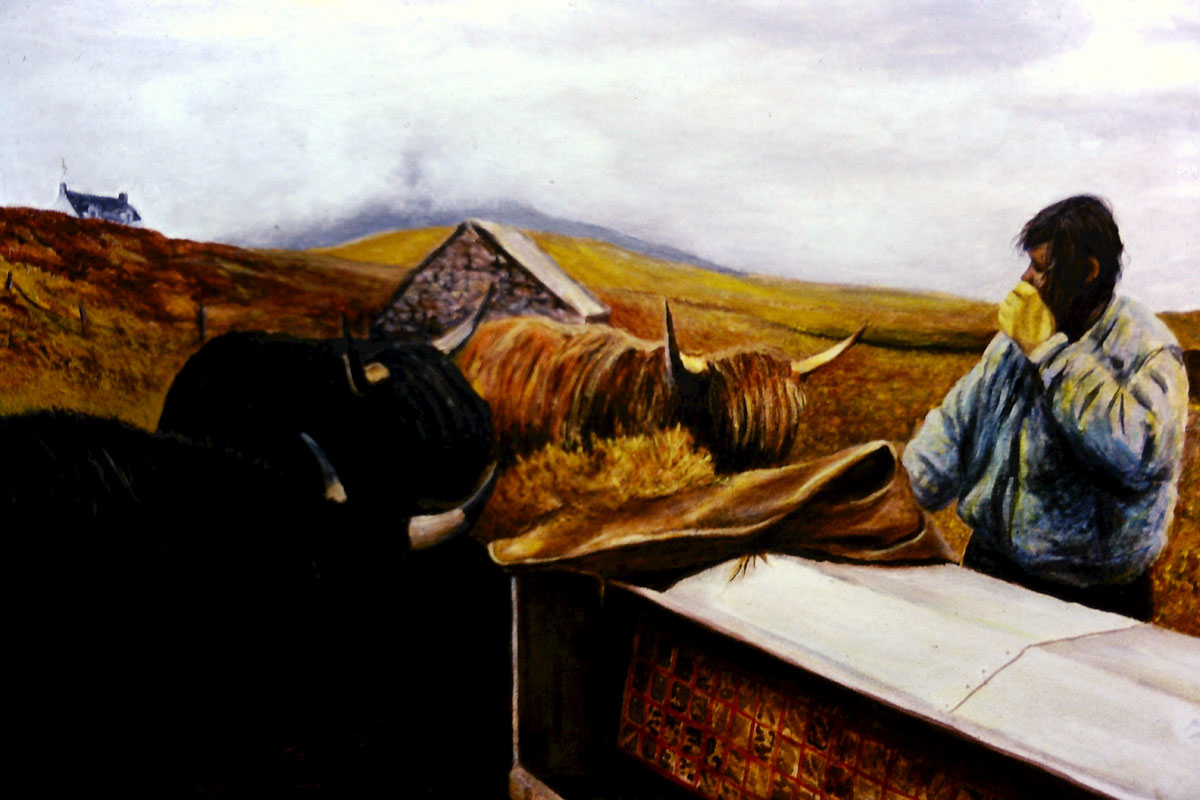 Marlene with the Coigach Herd. 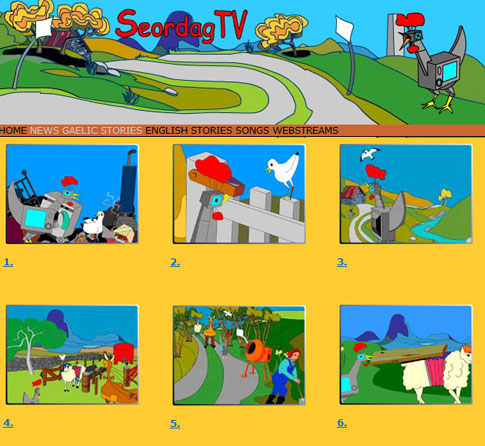 In 2003 David set up Seordag TV as an interactive bilingual website and made English and Gaelic versions of the first story. In 2020 Adobe Flash support ended and he took down the Seordag TV website. There is an alternative HTML5 version planned for launch soon.

David created a second story called "Seordag and the Seer" which was inspired by the legend of Highland prophet the Brahan Seer. It later was adapted into the picturebook origin story "Scrying Stone".

An extract of "Càit An Dèan Mi Mo Nead?" was performed by the Gaelic Youth Theatre at the MacPhail Theatre, Ullapool on Feb 24th, 2006.

David had already some self-publishing experience on his YA novella "Storm Hags" and Joan's book of fiddle tunes "The Golden Grain", so he started making the picturebook series Seordag Stories. 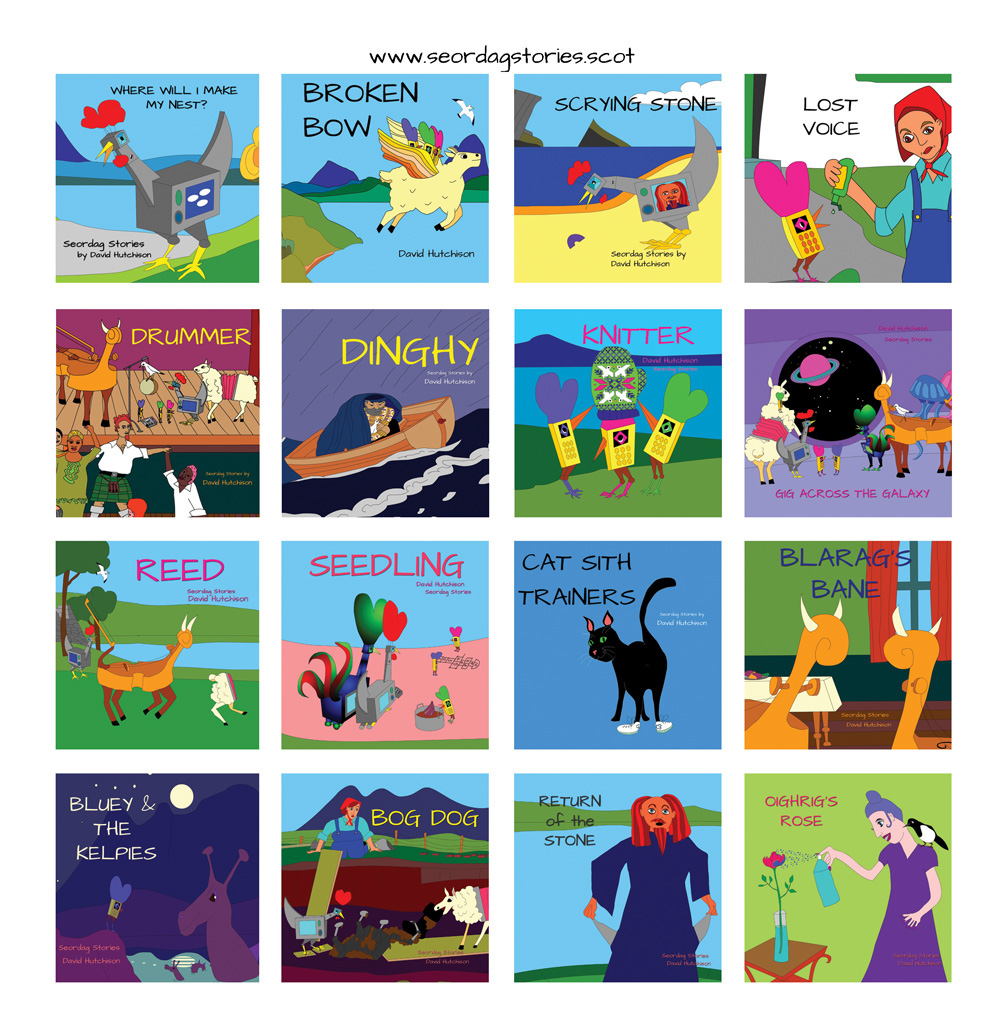 Joan composed a set of tunes to go along with the stories. In memory of David's now deceased Aunt Seordag, with the help of friends and Comhairle nan Leabhraichean he found Gaelic translators and also released the series as Stòiridhean Seòrdag. The ebook (epub3) versions have Read Aloud, excellently voiced by Alec McDonald, so you can click and hear the stories too. 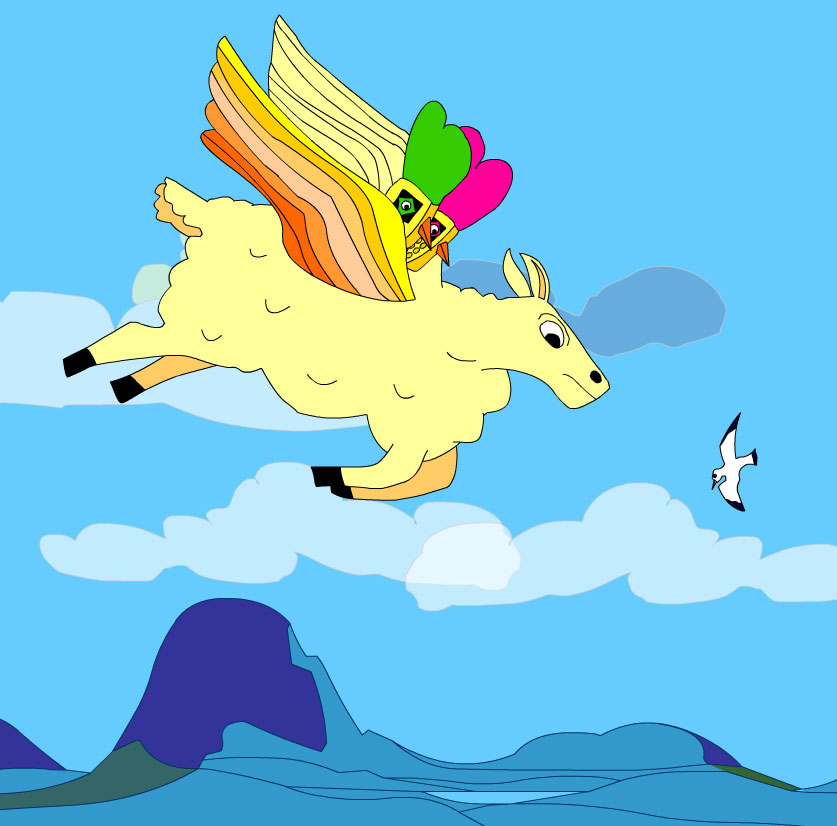 In book 2 "Broken Bow" David introduced the character Flossie the Flying Sheep. She actually started off a a mural he made in the Wayfarer's Bar, Culag Hotel. Ewella was then made into an interactive digital piece exploring cloning at Inverness Museum and Art Gallery. She also is the logo for Flying Sheep Publishing. 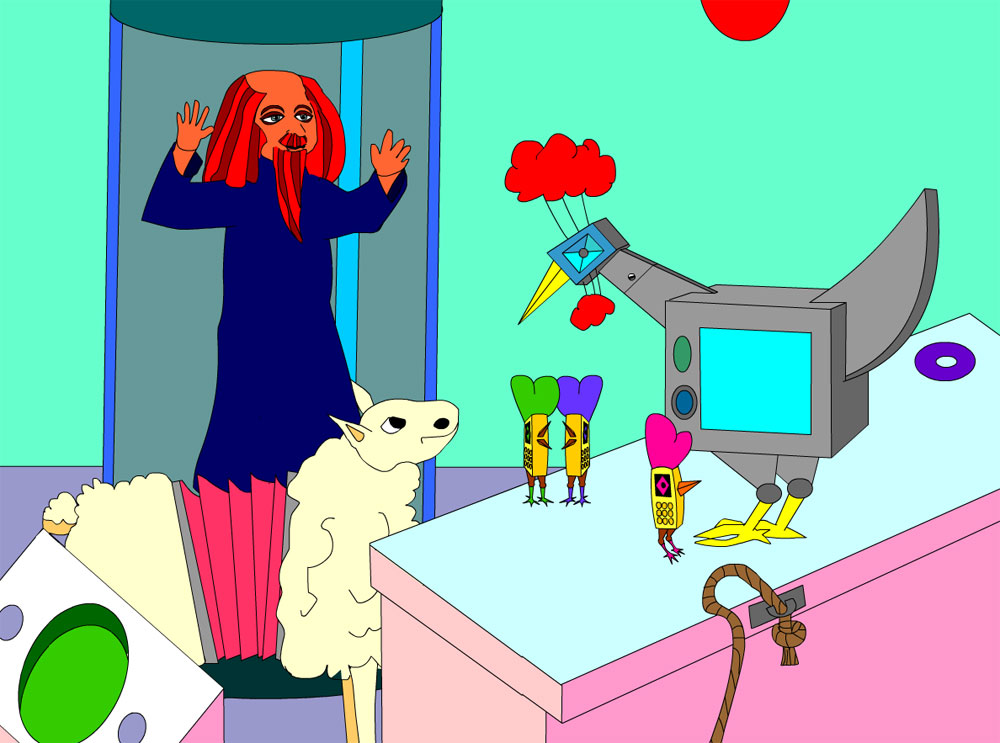 In book 3 "Scrying Stone" we find out more about Seordag's past and her friend The Seer. 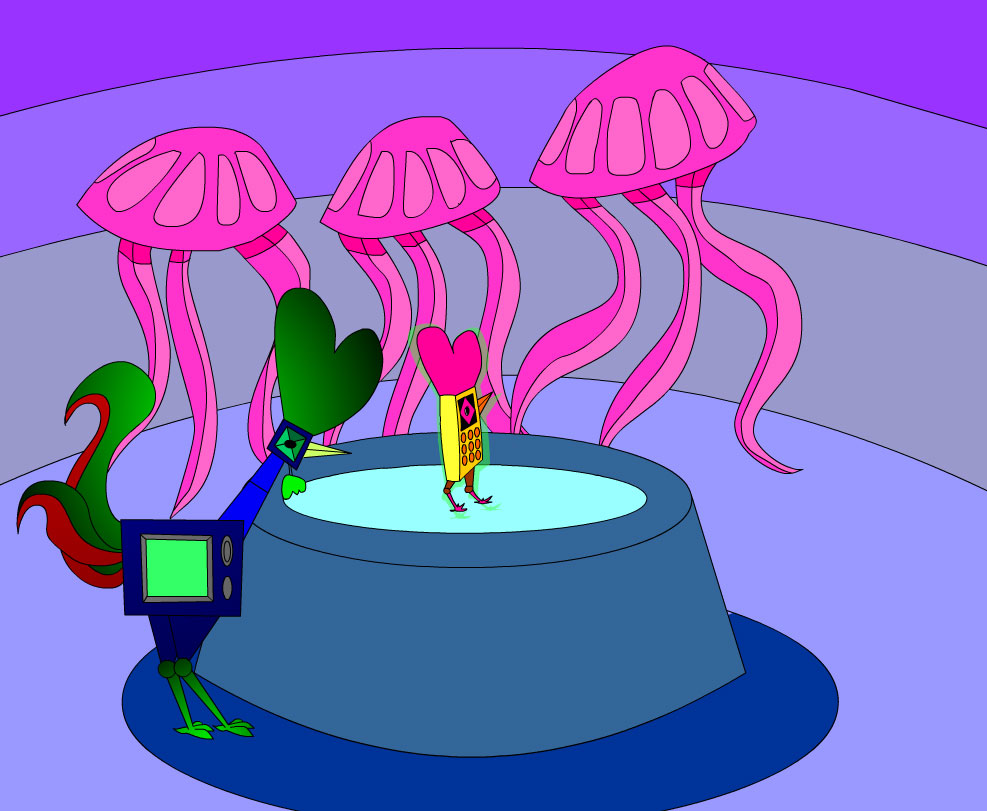 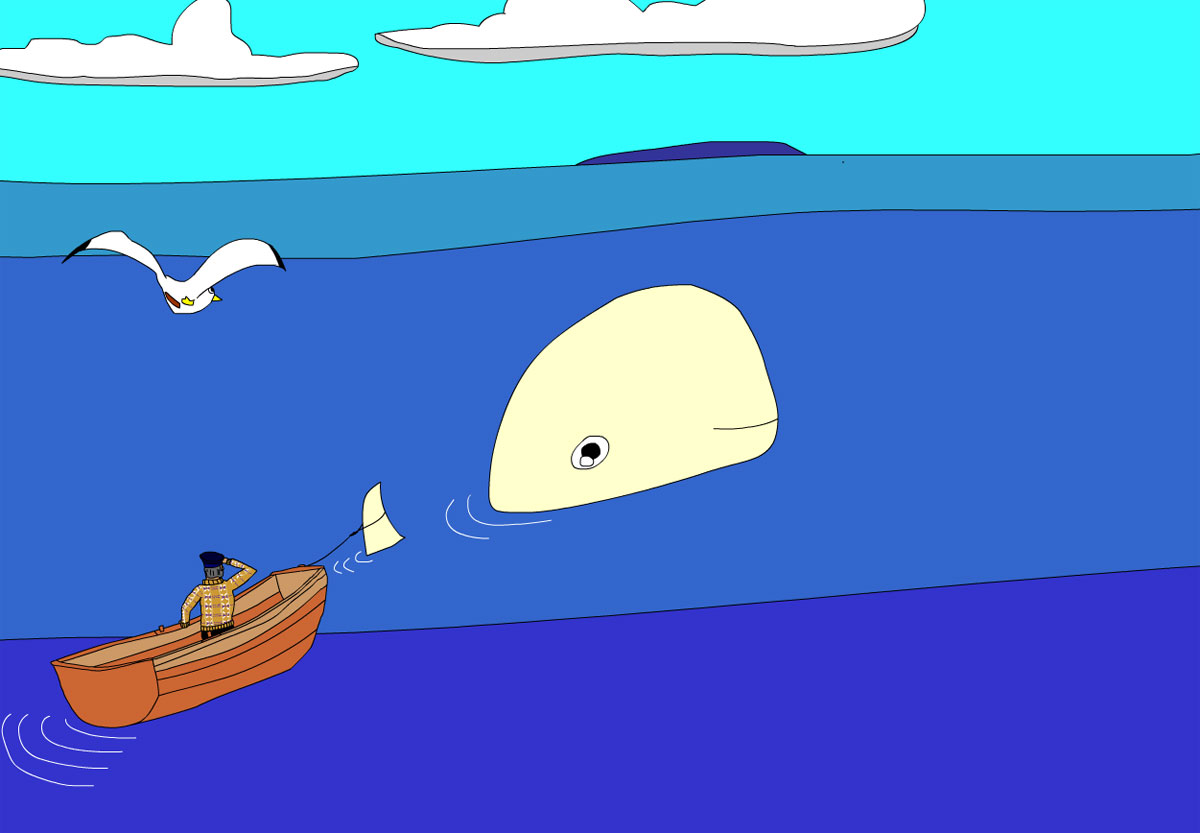 Book 6 "Dinghy" was inspired by Soley's story of how he got his wooden leg on the way to Whalsay (where David's father hails from). It was based on an oral story from his parents and included his grandfather Willie and his boat The Valkyrie.

Book 7 "Knitter" is about recycling and crafting.

Book 8 Gig Across the Galaxy takes the Byre Band on a journey across the stars, and the chicks get to know their father better.

In Book 9 "Reed" Ewella overdoes it and injures herself.

In Book 10 the Cosmic Cockerel comes to stay for a holiday and we learn more about zombie dandelions.

Book 12 "Blarag's Bane" concerns issues of conforming to ideals and fitting into a group.

In Book 13 "Bluey & The Kelpies", Seordag and the chicks climb Suilven. New characters the Kelpies are first introduced.

Book 14 Bog Dog is where Marlene loses a boot in a bog and discovers a robot dog.

Book 15 "Return of The Stone" is about the Seer searching for his lost stone. 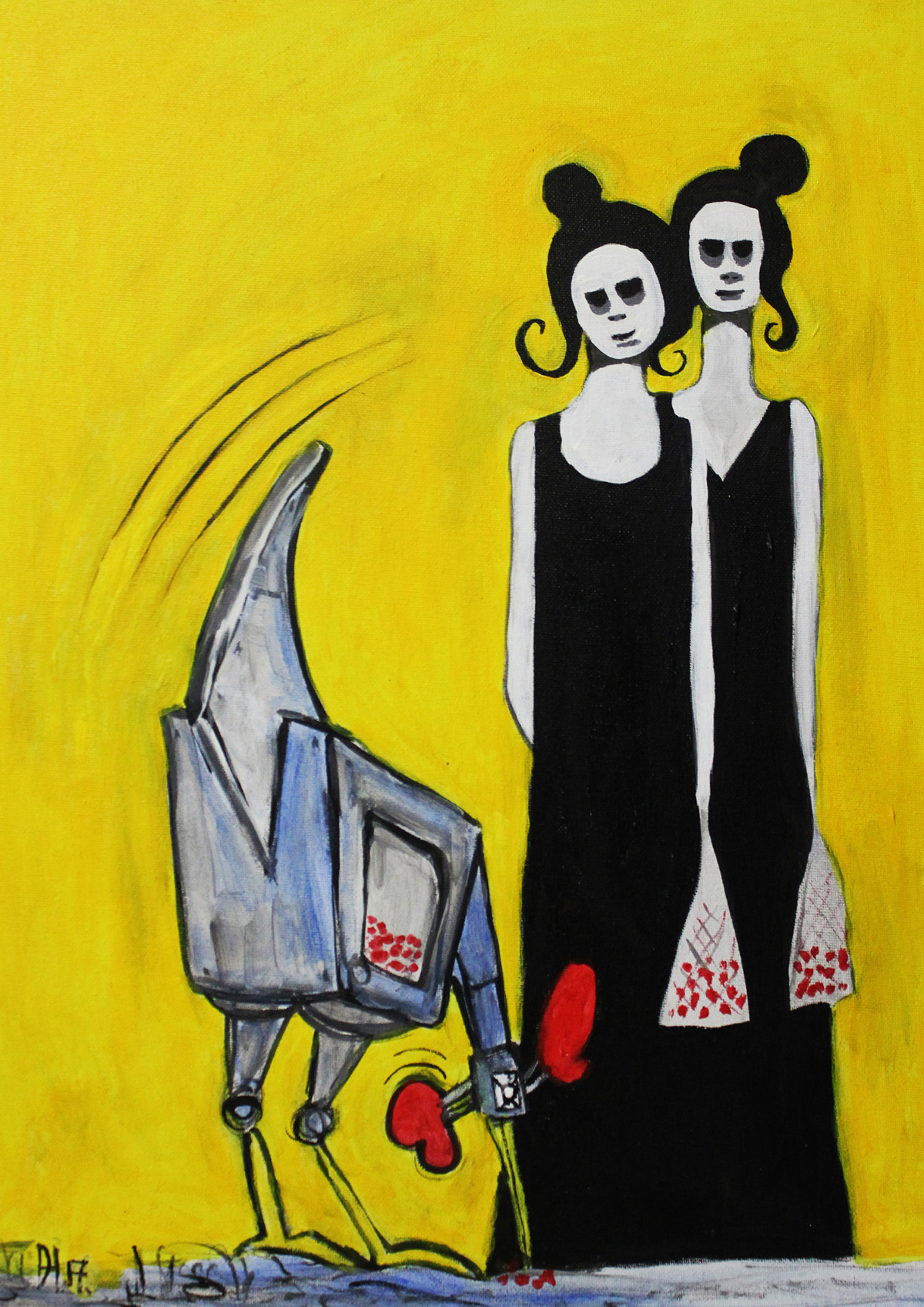 In 2017 David combined Seordag with his pop art series Deadgirls and created the above painting Deadgirls Feed TV Hen. He had the first Seordag & the Deadgirls exhibition (see review) at the Cameo Cinema in Edinburgh, and then in 2018 the Suilven Towers High exhibition at the Ceilidh Place, Ullapool.

The Deadgirls are not in the picturebooks yet but could possibly be in a future story with a ghostly theme.